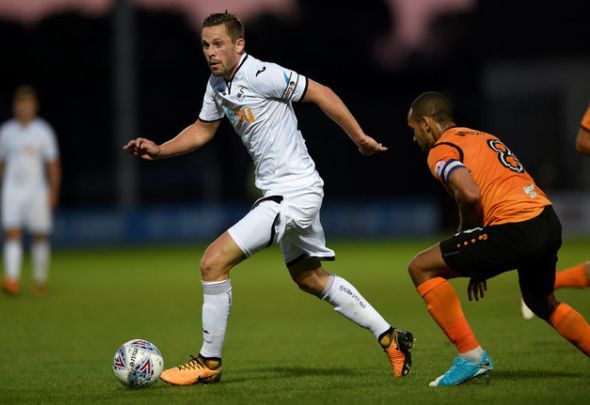 Everton will finally complete a £50million move for Swansea City attacker Gylfi Sigurdsson within the next week, according to a recent report.

The Mirror has revealed that the Toffees will seal the 27-year-old’s transfer within the next seven days now that his club has sourced a replacement for the squad.

The newspaper claims that the fellow Premier League club will give the green light to the playmaker’s move as the Swans prepare to swoop on West Brom winger Nacer Chadli for a fee of £20million.

It is understood that Everton’s transfer activity will also open up the possibility of a move for midfielder Ross Barkley as north London side Tottenham are interested in making the 23-year-old their first signing of the summer transfer window.

Former Tottenham attacking midfielder Sigurdsson moved to the Liberty stadium in 2014 in a deal worth £9million, just a fraction of his new price tag, and has since made 131 appearances where he scored 37 times and provided 30 assists.

The Iceland international will be the club’s eighth signing in Ronald Koeman’s busy transfer window.

While the team are positive, and their new signings are making an impact at Goodison Park, the addition of Sigurdsson will only heighten the club’s and fans’ positive mentality for the coming games. The Iceland star will be able to bring a breadth of Premier League experience and knowledge with him, which will be an advantage for the Toffees. However, a £50 million price tag seems completely extortionate as it’s around five times the amount Swansea signed him for from Tottenham three years ago. While his price tag is hugely overpriced, with the current transfer market and £50million-plus fees flying about for Premier League players, then it looks like the price Koeman’s got to pay.

In other Everton transfer news, a European giant is leading the Toffees in the hunt for this highly-rated Bundesliga attacker.