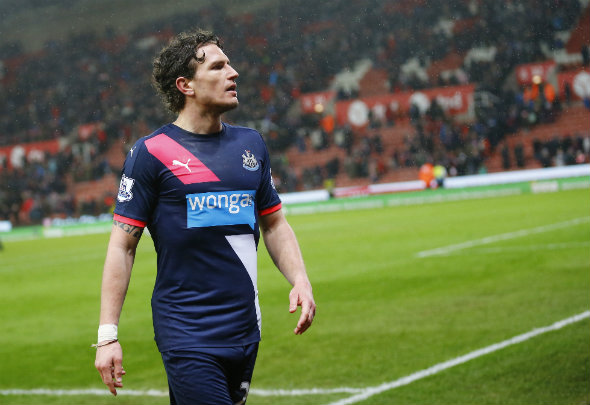 Daryl Janmaat has completed a swift return to the Premier League by signing for Watford, it was announced on Wednesday afternoon.

Watford then announced on their official website that right-back Janmaat has signed a four-year contract.

The two clubs did not disclose the fee but it was reported on Tuesday night that the Hornets had agreed a £7.5million fee for Janmaat with Newcastle, meaning that the Toon are in line to make a £2.5million profit despite suffering relegation.

Tottenham’s DeAndre Yedlin has been lined up as a possible replacement for Janmaat at St James’ Park, as new signing Jesus Gomez lined up against Cheltenham on Tuesday evening in the EFL Cup.

The experienced defender made  77 appearances in all competitions for the Magpies during just over two seasons at St James’ Park, scoring four goals.

His final outing for United came in a 2-1 home defeat at the hands of Huddersfield Town earlier this month.

The Holland international, who moved to Newcastle in 2014 for a fee around £5million from Feyenoord, has also played in 27 matches for his country.

In other Newcastle transfer news, Toon midfielder Henri Saivet has joined Saint-Etienne on loan for the rest of the season.