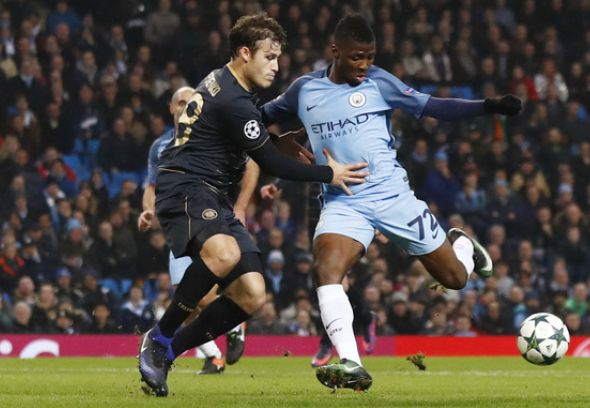 Newcastle fans have urged their club on Twitter to enter the reported race to sign Manchester City striker Kelechi Iheanacho this summer.

The Sun claim Everton are keen on the Nigeria international, while London Evening Standard has reported that West Ham and Borussia Dortmund are also eyeing the 20-year-old.

Iheanacho is known for his lightning pace that allows him to burst past defenders as well as his ability to find the back of the net, developing a reputation as a proven Premier League poacher.

This season, Man City’s number 72 has scored seven goals in 28 league and cup appearances for Pep Guardiola’s side, including strikes against Man United, Borussia Monchengladbach and Celtic.

Newcastle fans have taken to Twitter in an attempt to persuade their club to sign the young striker, as Rafa Benitez is continually linked with a number of players after gaining promotion back to England’s top flight.

#nufc Iheanacho of Man City is a player that'll score goals. Please don't delay Rafa! Someone get me Lee and Mike's numbers!!!!

Worth a shot I reckon. It's hard to tell how a player would do in a different team though

Need to be realistic in expectations, I think someone like smolov or potentially Iheanacho on loan #NUFC

That Iheanacho lad at Man City isn't get a sniff now they've signed Gabriel Jesus. Got to be worth a punt next season. #NUFC

Iheanacho has fallen down the pecking order at the Etihad, and is now below South American duo Sergio Aguero and Gabriel Jesus in Pep Guardiola’s plans.

The Toon currently have Dwight Gayle, Aleksander Mitrovic and Daryl Murphy to choose from to lead their attack, but Iheanacho could be brought in as another options this summer.

In other Newcastle transfer news, this midfielder is surprisingly drawing interest from other Premier League sides after a disappointing season.