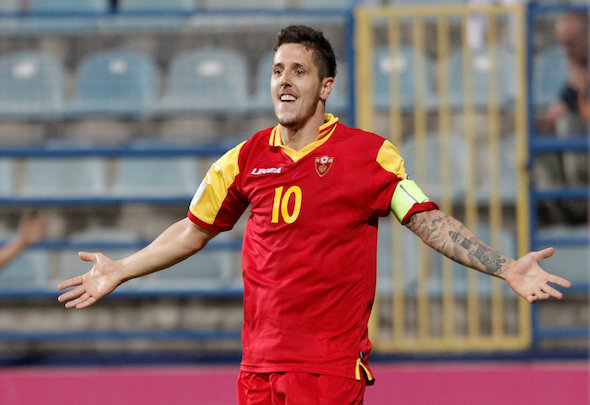 Inter Milan are willing to sell Stevan Jovetic to Newcastle as they are ready to offer more cash than rival bidders, according to a report.

The Mirror claims that Newcastle are ready to dish out £12million to land Jovetic, 27, while Sevilla are only prepared to go as high as £10million.

It is understood that the Montenegro international forward would prefer a return to Sevilla, where he spent last season on loan, while European giants Inter would rather strike a deal with the Magpies as they would receive more money.

However the report adds that the Tynesiders may struggle to match Jovetic’s hefty wage package of £90,000-a-week and may have to offload several players in order to bring the ex-Manchester City striker in before the transfer window closes next week.

Jovetic is yet to earn his first appearance of the season for Inter Milan having failed to make his way on to the pitch after being shoved on the bench for the last two matches.

He scored seven goals and supplied five assists in 24 appearances across all competitions for Sevilla last term and it seems that he feels as though he has unfinished business with the Spanish side.

Monaco, Roma and Brighton are also reported to be linked with a move for Jovetic.

Jovetic’s previous spell in England didn’t seem to go down too well but Newcastle will no doubt hope that playing for a team lower down the standings could see him hit his groove. The Montenegro international captain clearly has great ability and on paper he is definitely better than the options Rafa Benitez currently has in attack. However Jovetic seems to be more of a striker who plays better when he has a partner up front. The ex-Man City man likes to look for a pass at times and unless Benitez made changes to his tactics, it’s hard to see how the striker could fit in unless the wingers and the No 10 play closer to him. £12million is a decent fee though, it just remains to be seen whether or not the Magpies can afford it.

In other Newcastle news, the Magpies are in negotiations with a continental powerhouse in the hope of signing this Argentina international.