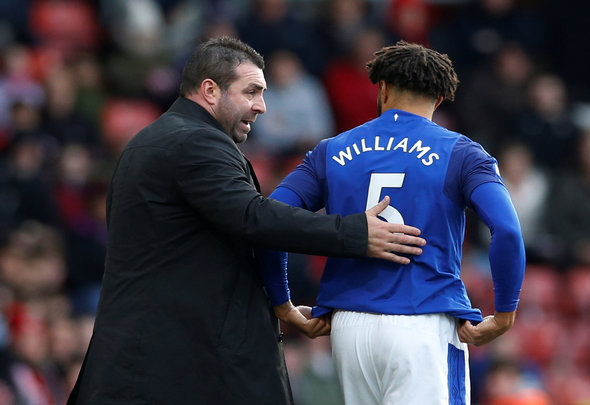 David Unsworth’s decision to start both Cuco Martina and Ashley Williams, in what is expected to be the caretaker manger’s last game in charge of Everton, has angered fans on social media.

Martina and Williams both came in for abuse when it was revealed that they were starting the game, with one saying it was the worst left side of defence that they had ever known.

The Toffees are set to play West Ham on Wednesday night at Goodison Park, in a clash that could see Everton slip into the relegation places if they lose.

Ahead of this game, the Toffees have 12 points from 13 games, having won only three times in the league this season, but on a positive note all three of their league wins have come at Goodison Park.

However West Ham do go into this game on the back of a positive result compared to Everton.

The Hammers drew 1-1 with Leicester City in their last game, where as the Toffees were hammered 5-1 by Southampton on Sunday.

Football Insider has collected some of the best tweets on Martina and William’s inclusion in the starting line-up:

Martina and Williams in defence pic.twitter.com/1v2GwES7uM

Seeing Martina and Williams in the back 4 for a must win game 😡 pic.twitter.com/EyZ6LGnnPO

Worst left side of defence I have ever known! 😷🤮

Martina & Williams, were useless with 11 on the pitch & now starting match with 9 players.

In the last 12 years, across all competitions, the Toffees have only lost once at Goodison Park to West Ham, with Everton winning on six occasions.

In other Everton news, this manager has quit an ultra-rich club following talks with the Toffees.