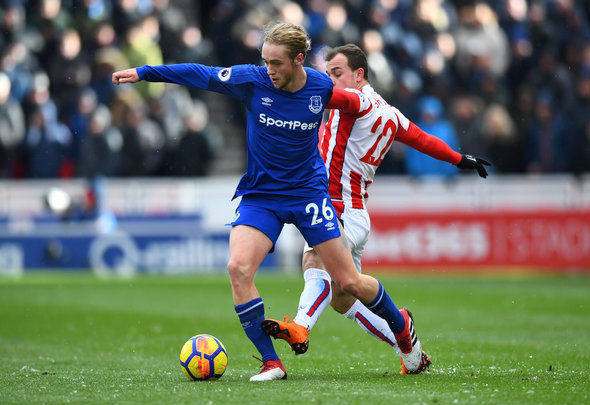 Everton fans have been left in despair at the display of Tom Davies in the 2-1 win against Stoke on Saturday.

Everton went into Saturday’s Premier League fixture against Stoke City at the Bet365 Stadium hoping for a chance to leapfrog Leicester City into eighth position in the table.

Cenk Tosun got his name on the scoresheet once more in the 69th minute with his third goal in three games after Charlie Adam was red-carded in the first half for a challenge on Wayne Rooney.

Eric Maxim Choupo-Moting levelled the score shortly after the Turk’s opener, only for the Everton striker to make his mark on the game once more, bagging his second and ensuring maximum points for his side.

Pre-match Toffees manager Sam Allardyce had sought help from a sports psychologist in a bid to end their away day troubles which had seen them fail to register a victory on the road in the top-flight since December.

It was a quiet opening from the Blues who looked deployed a defensive position from the off despite their attacking line-up.

Having said that, Tom Davies went close to opening the scoring in the 6th minute when a Wayne Rooney free-kick found the youngster free in the box, but he headed over when he should have scored.

And it was the display of the 19-year-old which once again left supporters bewildered as to what the midfielder actually offers the side and left them asking how he even makes the starting line-up.

Following the Toffees victory against the Seagulls last weekend, the Goodison Park faithful expressed their feelings towards the youngster after a number of poor displays this season.

Here is what supporters had to say following the side’s performance against the Potters:

Tom Davies isn't very good. Not allowed to say that tho as hes local one of us all that shit etc etc hes crap.

Tom Davies with a 6?! 😂🤣😂 It was a very poor performance by both Bolasie and Davies in the first half. I’d be hard-pressed to give either a 4.

Serious question this can anyone help. What is tom davies really good at, I’m yet to see anything all season. Young lad yes, but what does he do

GET TOM DAVIES OFF https://t.co/pzyizoutqr

Tom Davies has had an appalling season nevermind game. Get him off.