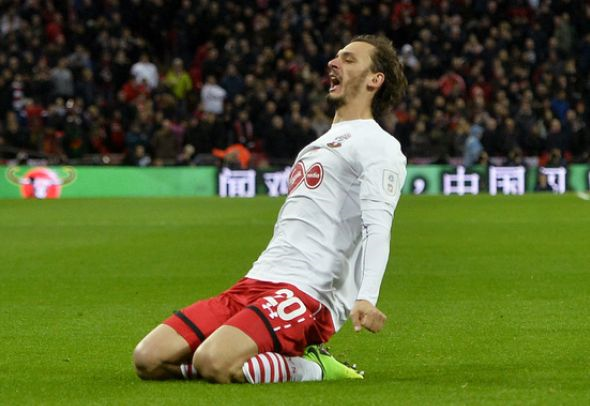 Everton fans were left raging on Twitter after Manolo Gabbiadini continued his goalscoring run for Southampton on Sunday.

The 25-year-old was linked with a move to Everton last month, but he instead signed for Southampton in a reported £15million deal.

He had also been reportedly subject to an approach from the Toffees in the summer, with a £21million offer believed to have been rejected by Napoli.

Gabbiadini ran riot for Southampton during their EFL Cup Final clash with Manchester United, netting twice for the Saints.

But his impressive performance was not enough to secure a precious victory for Southampton, and see them to their first major title since their 1976 FA Cup triumph.

The Italy international has now hit the back of the net five times since arriving at the club at the end of January, and Everton fans on Twitter were left irritated to have missed out on the goalscorer.

Always knew we'd end up regretting not getting Gabbiadini

For the umpteenth consecutive week…@Everton missed a trick not signing Gabbiadini.

Nice of Everton to allow Gabbiadini to go to Southampton to gain some experience before signing him this summer.

So it's looking early on like we've missed out on a player in not signing Gabbiadini. He's not the first and won't be the last.

That Gabbiadini is class, shame we didn't sort that one

Everton fans have not been short of reasons to be cheerful in front of goal this season, due to the exploits of Romelu Lukaku.

However, aside from the Belgium international, Ronald Koeman does not have any top-quality goalscoring options at his disposal, and fans believe Gabbiadini could have been a real asset.

Gabbiadini also had a goal disallowed for offside in the defeat on Sunday, but replays showed the goal should have stood; and had it been allowed, could have changed the complexion of the game.

In other Everton news, here is why Everton should sign this Premier League 22-year-old, amid reports he is unsettled at his current club.