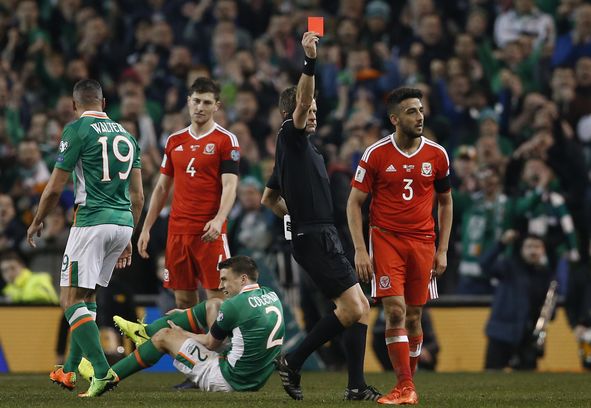 Everton full-back Seamus Coleman suffered a horrific injury during the clash between Republic of Ireland and Wales on Friday night – and fans are furious.

Coleman, 28, was caught high and late by Wales and Aston Villa left-back Neil Taylor, who was shown a straight red card for his reckless challenge.

The incident was the main talking point to emerge from what was an underwhelming encounter between the two sides, with a lack of creativity and incisiveness contributing to a goalless draw.

Taylor’s wild tackle saw Coleman carried off on a stretcher and taken to hospital, with reports later confirming that the Everton star had broken his leg.

While many Everton fans were quick to post messages of support to their first team star on Twitter, others chose to attack Taylor, 28, for his challenge.

Shocker of an assault by Taylor on @seamiecoleman23. Should be banned for a long time for that. #GetWellSoonSeamus #EFC #WALROI

Neil Taylor needs a long look at himself, caught up in a heated tie and lost it #efc

horrendous tackle. Have no respect for Taylor. Looked to me he had the intent to injure…

Neil Taylor- an awful footballer with an awful tackle…

He's had a bad injury himself that Taylor & should know better.

McCarthy has a history of niggling injuries, and his latest setback did not sit well with Everton fans.

The midfielder had not yet fully recovered from injury prior to his international call-up, so the writing was already on the wall for the Everton man to break down if rushed back by the national side.

As a result, Everton will now be without two key first-team players for the most part of the remainder of the season.