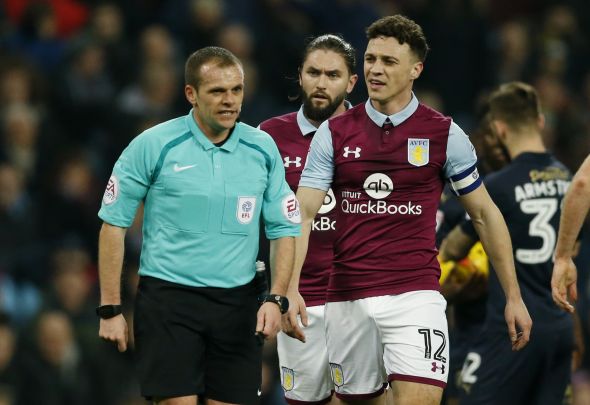 Jack Grealish, Jonathan Kodjia and Matt Ritchie would all miss out in a starting line-up consisting of the best Aston Villa and Newcastle players.

Steve Bruce’s Villa travel to the north east to take on Newcastle at St. James’ Park on Monday night, as they look to end a winless run of nine games and dent the Toon’s title hopes.

Newcastle will be desperate to get back to winning ways after high-flying rivals Brighton beat Barnsley 2-0 at Oakwell to leapfrog the Magpies into first place in the Championship table.

Newcastle’s impressive attacking talents such as Ayoze Perez, Christian Atsu and Aleksander Mitrovic would join Grealish, Kodjia and Scott Hogan in being overlooked for the side.

Despite his catastrophic blunder against Norwich on Saturday during a 2-2 draw, Karl Darlow would be preferred to Johnstone as fans call on the Villa stopper to be axed against Newcastle.

Teenager James Bree has continued to shine and he would start over DeAndre Yedlin at right-back, while captains James Chester and Jamaal Lascelles would form a formidable defensive partnership.

The battle for the left-back slot comprises of two Wales internationals, but Villa’s Neil Taylor would come out on top against Newcastle’s Paul Dummett.

In midfield, a proven mix of Premier League and Championship experience in Jonjo Shelvey and Henri Lansbury would promise goals and attractive football from deep.

Ahead of them, Mohamed Diame would still get the nod despite a poor season, beating Grealish and Perez to the number 10 role.

Frenchman Yoann Gouffran has had a hand in 11 goals for the Magpies this season under manager Rafa Benitez. Scoring six goals, the Toon’s number 20 has also provided five assists.

That would see him start on the left, with Ghana international Albert Adomah on the right. Despite strikers such as Hogan, Kodjia and Mitrovic on offer, it is impossible to look past the Championship’s top goalscorer, Dwight Gayle, for the centre-forward role.

In other Aston Villa news, this 26-year-old must keep his head against Newcastle.