Former Rangers midfielder Charlie Adam thinks Allan McGregor has been in “top form” this season – after the goalkeeper was reported to be close to a return to Ibrox six years after tearing up his contract and leaving the Gers in the lurch.

According to the Scottish Sun, McGregor is close to agreeing a two-year-deal to join the Gers in the summer when his Hull City contract ends and Adam thinks signing the Scotland international will be the start of the rebuild at Ibrox.

“Hopefully they get it over the line and the rebuild starts.”

He has been in top form this season. Hopefully they get it over the line and the rebuild starts

McGregor was one of a host of players who ripped up their contract in 2012 when the Gers’ parent company went into liquidation and the players refused to transfer their contract to Charles Green’s newco.

The 36-year-old made 250 appearances for the Gers during his time at Ibrox and lifted three Scottish titles, three Scottish Cups and five Scottish League Cups before leaving to sign for Besiktas.

McGregor will improve the quality of the Gers squad although there are still some fans with a bad taste in their mouth after the nature of his departure in 2012. The Scotland international is in the twilight of his career so isn’t going to be a long-term signing at Ibrox and should give some real competition to Wes Foderingham – unless the current number one decides to move on. McGregor knows what it takes to be part of a successful Rangers team so will bring invaluable experience to the club. 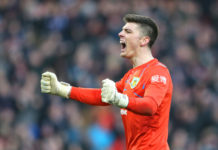