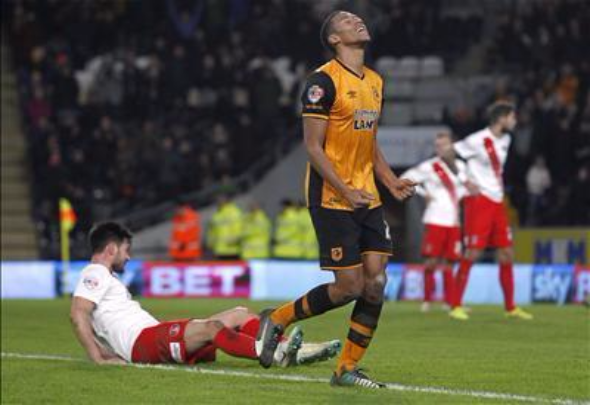 Isaac Hayden has told Newcastle fans what they can expect from him in an announcement after he joined the Tyneside club on Monday.

The 21-year-old midfielder joined the Magpies from Arsenal in a deal that will reportedly cost £2.5million.

In a statement released via his Twitter account, the England Under-20 international told Newcastle fans that he will play with passion and commitment, as the supporters do.

The youngster joined the Arsenal youth academy at the age of 13 from Southend in 2008.

The defensive midfielder made two appearances for the Gunners during his eight years at the club and spent last season on loan with Hull in the Championship where he made 24 appearances in all competitions.

In his statement he said: “I’m so excited to sign for such a huge club like Newcastle United. I’ve heard stories from other players just what it’s like to run out onto St James’ Park in front of more than 50,000 passionate Geordies and the infamous Gallowgate. I know NUFC fans are deeply passionate and committed when it comes to their football and this club and that’s exactly what they can expect from me when I pull on the black and white stripes this season. Let’s get back to the Prem! Thanks for the warm welcome! #ToonArmy #NewHome”

Newcastle are looking to overhaul their squad which suffered relegation to the Championship last season, as they attempt to bounce back to the top flight at the first time.

The Magpies managed to keep hold of former Real Madrid boss Rafa Benitez and have already brought in five players this summer, which include Hayden, Dwight Gayle and Matt Ritchie all coming from Premier League sides.

In other Newcastle news, Blackburn Rovers boss Owen Coyle has issued a hands-off warning to the Mapgies.