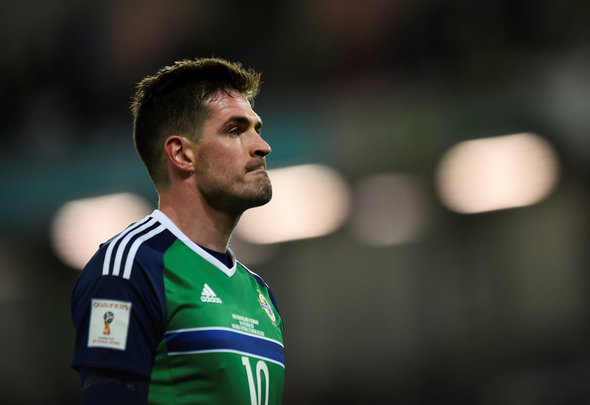 Kyle Lafferty has taken to social media to admit he has been blow away by Rangers’ most recent signing of Russell Martin and says he cannot wait to play against him in the Scottish Premiership.
Martin, 32, wrapped up his loan move from Norwich to Ibrox on Wednesday as Graeme Murty continues his overhaul of the squad.
The Hearts striker played with Martin when both men were at Norwich, and Lafferty used his personal Twitter account to laud the qualities of the Scotland international.
“Great signing for Rangers. Russell Martin one of the good guys in football and not a bad footballer either. Leader and a born winner. Excited to play against him,” said the Northern Irish international.
https://twitter.com/laffk10/status/953387816146341888
Martin, who has played for Scotland 29 times, has joined the Light Blues on-loan until the end of the season.
The 32-year-old has found first-team opportunities hard to come by at Carrow Road in recent months and has taken the chance to revitalise his career in Glasgow.
He could be used in both a central-defence and right-back role, but will most likely be used in the centre of defence as a replacement for the similarly experienced Bruno Alves, who is out for the foreseeable future with a calf injury.
Martin is just the latest of a host of new signings at Ibrox in the January transfer window which have also included Sean Goss, Jamie Murphy and Jason Cummings as manager Murty puts his imprint on the Light Blues.
Martin could make his debut for Rangers on Sunday as the Gers head to non-league Fraserburgh in the Scottish Cup as the winter break comes to an end.
In other Rangers news, Martin has revealed why he joined the Gers
We’ve launched a << BREAKING NEWS FEED>> exclusively for your club. ‘Like Us’ on Facebook by clicking here if you want 24/7 updates on all Rangers breaking news.