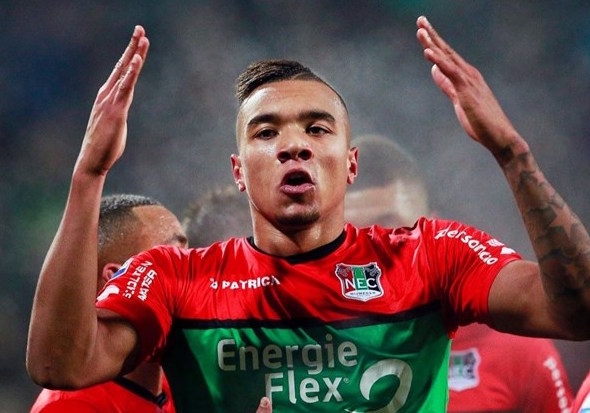 Leeds United have agreed a deal for 19-year-old striker Jay-Roy Grot from NEC Nijmegen, according to a report.

Sky Sports have claimed on their Transfer Centre blog (3.58pm), that a deal has been agreed and is now just subject to a medical.

Manager Thomas Christiansen had said that he would move “fast” to sign a new striker after the 2-0 win at Sunderland on Saturday.

Striker Chris Wood was omitted from the squad that beat the newly-relegated side and he was subsequently sold to Premier League side Burnley for £15million.

If the medical is passed successfully he’ll have stuck to his word, but Leeds fans will be hoping that more targets are brought in with just eight days left in the transfer window.

Leeds fans were dreading losing Chris Wood after the striker almost single-handedly fired Leeds to the Premier League last season. But it’s funny how things turn out and the transfer could end up being the thing that propels the club towards promotion this year. Getting £15million+ for Wood was good business and Christiansen has moved fast to bring in replacements. Other names, like Rudy Gestede and Jordon Mutch, have already been mentioned and it looks the £15million could go a long way. No fee has been mentioned for Grot yet but it is expected that there will still be a lot of money left from the Wood deal to spend on even more targets. And that could prove to be vital for Leeds. As for Grot, he’s untested but is a strong and highly-rated player at his club. He could add the depth the squad needs this season, but he’s unlikely to be the main striker. These are exciting times to be a Leeds fan.

In other Leeds transfer news, fans of the Yorkshire giants have reacted to Souleymane Doukara’s mutual termination.