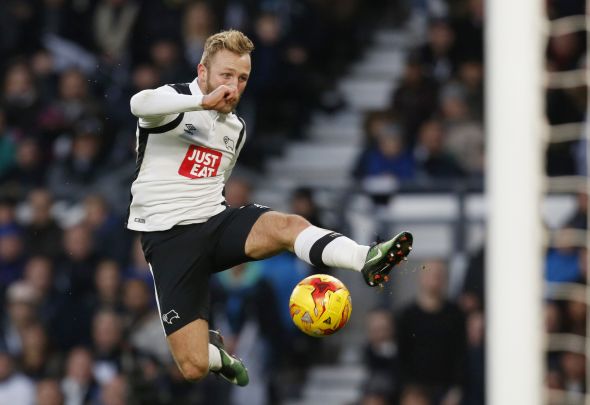 Leeds should challenge two Championship rivals for Derby ace Johnny Russell as they look for an extra attacking bite to aid their pursuit of Premier League promotion.

Sun correspondent Alan Nixon claimed on his personal Twitter account that the 26-year-old is currently on the radar of both Brighton and Birmingham.

With Leeds looking to rival both Birmingham and Brighton for promotion to the top flight, here are three reasons why they should look to grab Russell from under their rivals’ noses.

Having a hand in in 56 goals during his time in the Championship with Derby, Russell’s experience in the second tier of English football could prove invaluable as Leeds look return to the Premier League for the first time since their financial collapse of 2004. Having played 162 league games, Russell has scored 29 times in the Championship for the Rams as well as providing 27 assists. Normally lining up on the left side of an attack, Russell’s ability find the back of the net could take the goalscoring pressure off of the shoulders of top scorer Chris Wood.

Manager Monk is likely to want to add to his flanks with less than two weeks left in the January transfer window. Possessing just two recognised wingers in Stuart Dallas and Hadi Sacko, Monk has been forced to rely on the versatility of Souleymane Doukara and Kemar Roofe to provide the former Swansea manager with options out wide. Bringing in four-time Scotland international Russell would give the former Swansea boss top-quality cover, which could also get the best out of striker Wood as he is renowned for his ability to conjure up an assist.

Signing Russell over rivals Birmingham and Brighton would see Leeds receive a player that can make the difference in the final third, leaving Gianfranco Zola and Chris Hughton without Russell’s attacking talent. Zola’s side are likely to be eyeing a place in the play-offs while Hughton’s Seagulls will be desperate to maintain their position in the top two. Bringing Russell to Elland Road would see Leeds gain an advantage on their rivals, as Russell would be pulling on the white of the former Champions League side instead of playing for either of their rivals.

In other Leeds transfer news, this approach has been made for one of Monk’s international stars.