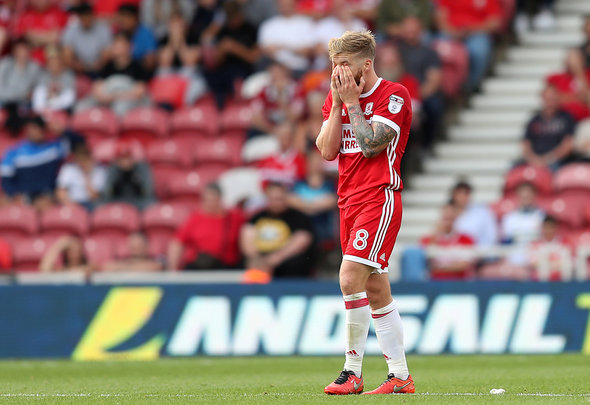 Nottingham Forest have been installed joint-favourites with Leeds United to sign Middlesbrough midfielder Adam Clayton, according to the latest bookmakers’ odds.
BetVictor have Forest and Leeds both priced at 4/1 to sign Clayton, 29, during the January transfer window after the Northern Echo reported that Boro will consider offloading the midfielder.
Sheffield United and Sheffield Wednesday (both 8/1) are also in the running to sign Clayton, who has fell well down the pecking order at the Riverside and may be in line to move for a fee of well over £1.5million before the end of the month. Aston Villa (10/1) and Derby (12/1) are outsiders to sign the Riverside midfield warrior, known for his combative spirit and high energy, who has made just two Championship appearances since mid-October.
It was understood that Boro will look to make a “sizeable” profit on Clayton should they sell him in January.
The Echo claimed that the North-East club signed him from Huddersfield for £1.5million but will want more than that to consider letting him leave.
The report said that Leeds and Nottingham Forest were among a clutch of clubs to register an interest in the midfielder, who had previously spent two years at Elland Road.
Leeds though look on the verge of signing Clayton’s Middlesbrough team-mate Adam Forshaw after the Gazette reported that he is undergoing a medical with the West Yorkshire club.
In other Leeds United news, this £3million duo may be offloaded on temporary deals this month.
We’ve launched a << BREAKING NEWS FEED>> exclusively for your club. ‘Like Us’ on Facebook by clicking here if you want 24/7 updates on all Leeds United breaking news.