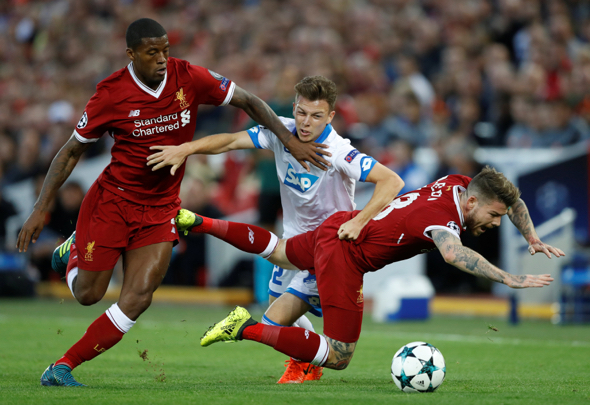 Liverpool eased their way into the draw for the group stage of the Champions League on Wednesday night, avoiding a potential banana skin.

Hoffenheim were never going to be a pushover but with a 2-1 advantage from the first leg, Liverpool held all the Aces going into the second leg at Anfield.

And they cruised into a 3-0 lead in the first half thanks to a brace from Emre Can and a first Anfield goal from Mohamed Salah.

They were breathtaking in attack, with Sadio Mane and Roberto Firmino combining brilliantly – but they couldn’t keep a clean sheet.

And it was the defence that came under fire from Liverpool fans who know that their team needs to tighten up if they really want to mount a challenge in the Champions League.

Alberto Moreno came in for the most stick, despite Jurgen Klopp insisting that the player had earned his place in the line-up tonight.

The Spanish left-back looked great going forward but typically shaky at the back and Liverpool fans were quick to put the boot in.

I'll say this, Liverpool would be 8% less exciting to watch if Lovren and Moreno were aware of one another.

#LIVHOFF If Liverpool eventually let Coutinho join Barcelona they should add up Lovren and Moreno as bonus transfer.

😂 I don't gamble but feel like I'm missing out on a second income. Both teams to score on Liverpool games when Lovren & Moreno play = easy £ https://t.co/ngJTZcCkHz

Liverpool playing Moreno and Lovren *acts surprised when we concede

Even @tokstarr can score against Liverpool from Moreno's wing. Pffttt

With all the goals being scored Liverpool are still nervous at the back, Moreno is absolutely TERRIBLE! 😡 #LIVHOF

Liverpool will find out who they face in the group stage of the Champions League when the draw is made on Thursday at 5pm.

In other Liverpool news, Leeds have been installed as favourites to sign this Reds player.