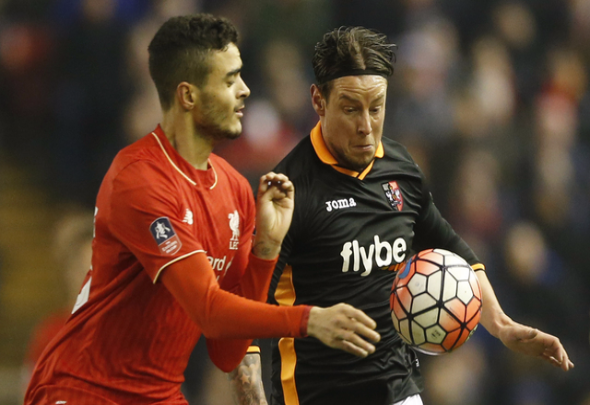 The Liverpool Echo reported on Thursday that the Reds had agreed a deal to let defender Tiago Ilori move to Reading – and fans of the Mereseyside giants are happy on Twitter.

It is stated in the report that Liverpool have settled terms of the transfer, with the fee believed to be at £3.75million.

The 23-year-old made the switch to Anfield in the summer of 2013 for a fee of £7million from Portuguese giants Sporting Libson.

He joined with much promise, but it is fair to say that the Reds supporters haven’t seen a lot of the young defender after playing just three times for the senior team.

Liverpool fans are now happy on social media that he is leaving the club and have expressed some joy for the fee they’ve managed to recoup.

Good move for Ilori going to Reading. Not going to get a game here & it's to a team riding high in the Championship. £3.5m too 👍 #LFC

£3.75 million for Tiago Ilori? Did Alan from The Hangover film get Reading drugged up on Rohypnol on a negotiations night out? #lfc

It's mad there's two lads playing for #LFC named Ilori. Cause I know the one being sold can't be the same one who was gonna partner Sakho? 🤔 pic.twitter.com/QkqP9jBRaT

We've got about half of what we paid back for Tiago Ilori, but it's only a few mill lost, and not, like in the past, tens of millions. #LFC

Things could have been so much different for Tiago Ilori at Liverpool if his loan at Aston Villa hadn't failed so spectacularly. #LFC

Have a soft spot for Ilori watched him 4 Granada v Barca and was outstanding .. but trust in Kloppo much more .. #lfc #moveon

Ilori spent the first half of last season out on loan at eventual relegated side Aston Villa, where he failed to make an appearance.

The Championship may be more his level and he will be joining a centre-back legend with Jaap Stam currently in charge of Reading.

The Berkshire-based club are currently sat in third place in England’s second tier, meaning Ilori could return to Anfield in the not too distant future.