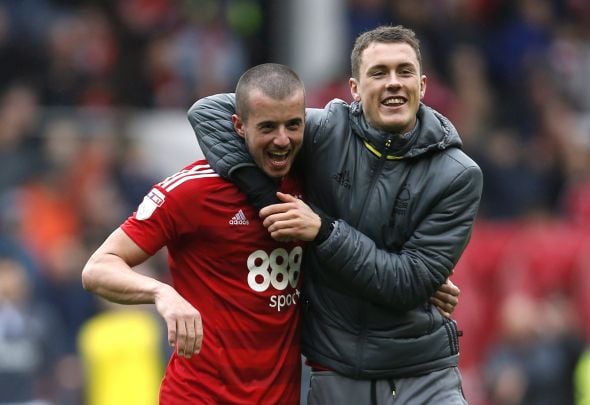 The 24-year-old defender is out of contract at the end of the season, but Warburton confirmed on Monday that he will not be offered an extended stay at the City Ground.

Pinillos arrived at the Championship club from Cordoba in July 2015, but has made just 35 appearances in all competitions, having struggled with a serious knee injury.

The Spanish left-back managed just one appearance between August and mid-January due to his knee injury, but had an important role to play during the second half of the season, as they battled against relegation.

However, he was omitted from the matchday squad as Nottingham Forest secured their survival on the final day of the season with a 3-0 win over Ipswich, meaning his last game for the club was a 2-0 defeat to QPR.

Speaking to the Nottingham Post, Warburton insisted his decision to let Pinillos leave in the coming weeks is the correct decision.

He said: “Dani Pinillos will be leaving the club, he will not be staying with us. It is my decision, it is about doing what I think is right.

“During my time in the hotseat, he has been nothing but professional. He scored against Derby and it was his delivery for the first goal – and we thank him for all his efforts.

“That was one of those moments – but it is also the nature of the game. He played his part and he is a good player. He is a professional and he will do well moving forward.”

The Sun’s transfer expert Alan Nixon had claimed in Sunday’s paper edition (pave 63) that Championship rivals Wolves were considering a bid to snap him up on a free transfer.

Pinillos will be free to talk to other clubs after his departure was confirmed on Monday, with the player also taking to Twitter to send an emotional message to the fans.

A pity to have to leave a club that has given me so much. I wish you all the best. Nottingham will always be my second home. 🔴⚪️
YOU REDS ❤️

Warburton has not had too much time to assess the first-team squad ahead of the summer transfer window, but he seems to have made up his mind quickly on Pinillos. The Spaniard was one of three left-sided full-backs in the Nottingham Forest senior squad, and with his contract nearing expiry, Warburton has chosen Pinillos as the player to make way. His ongoing injury concerns may have played a part in his departure from the club, having suffered two serious knee injuries during his Nottingham Forest career. He was a decent squad player, but Warburton reckons he can get better.

In other Nottingham Forest transfer news, the club are set to make a decision on the future of this 22-year-old, who is attracting interest from three English clubs.