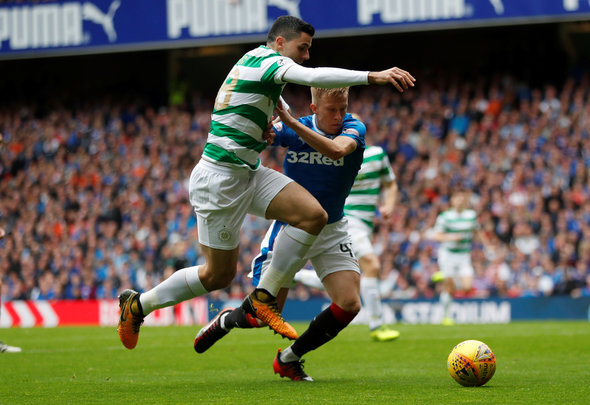 Scotland Under-21 boss Scot Gemmill is delighted to see Ross McCrorie get his chance at first-team level and thinks the 19-year-old got off to a “great start.”

McCrorie made his first start for Rangers in Saturday’s Old Firm clash with Celtic and impressed fans with a composed performance at the heart of Rangers’ defence.

The Rangers Academy star replaced the injured Bruno Alves during last week’s Scottish League Cup tie with Partick Thistle before being thrust into his full debut on Saturday.

Gemmill believes McCrorie has ambitions to play at the top level and thinks he made a great start to his senior Rangers career.

“I think it’s brilliant that Ross got to play in such a big game and that he was trusted to do so,” Gemmill said, as quoted by the Daily Record website.

“He’s been waiting for his big opportunity but he really stepped up to the plate and put in a real solid performance. I’m delighted for him.

“I think it’s still really early to say [he can be one of the best defender in Rangers and Scotland’s history] but it’s a great compliment to Ross that his manager speaks so highly of him.

“All these players are trying to play at the top level and show their ambitions. It’s our job to help them achieve that.

“Ross has played for us at Under-16s through to the 21s. Anyone who’s seen him through that period would have been in no doubt he could handle the Old Firm game.

“The fact his manager trusted him to play in such a big game will hopefully give Ross that extra confidence. He didn’t let his manager down, that’s for sure.

“I know Ross is extremely ambitious to play at the top level. It’s harder to get those first-team opportunities at the bigger clubs but he certainly got off to a great start.”

McCrorie could keep his place in the Rangers line-up for Friday’s trip to Hamilton with Bruno Alves still struggling with a calf strain.

In other Rangers news, this BBC commentator has brutally mocked the Gers players after the Celtic loss.