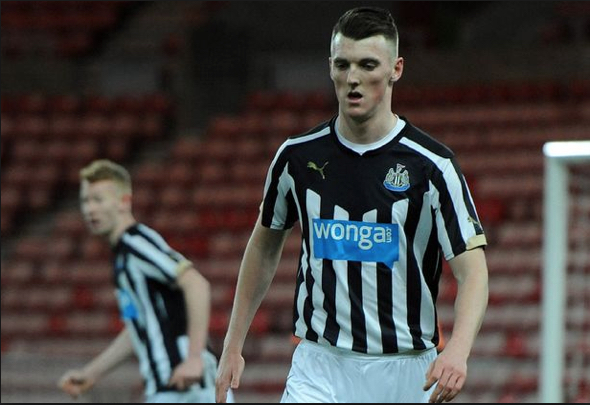 Newcastle enforcer Kyle Cameron has had his loan deal with Scottish Championship club Queen of the South terminated.

6ft 2in Cameron has returned to St James’ Park with immediate effect after the decision was made.

The 21-year-old moved north of the border in January but has only nine appearances and was left out of the squad for the last two league games.

The report claims he was set to play no part in the final game of the season and manager Gary Naysmith made the decision to terminate his deal early.

Talking in the Scottish Sun, Naysmith said: “The boys have gone back to their clubs.

“We took a bit of a risk with three of them as we needed to boost squad numbers back in January and we are grateful for what the boys gave us.”

“The moves have probably not worked out as well as anyone would have hoped but that is football.

“We are thankful that they helped us when we were short and we wish them well in the future.”

Cameron has impressed in the Newcastle Under-23s this season and would have been hoping to make more of an impact in the lower-league Scottish club in order to prove that he can make the step up to the senior squad. As it is, it hasn’t worked out and Cameron will have to start all over again when he gets back to St James’ Park. The 21-year-old is running out of time to get his career moving forward.

In other Newcastle United news, Paul Dummett took a swipe at Sunderland after their relegation was confirmed.