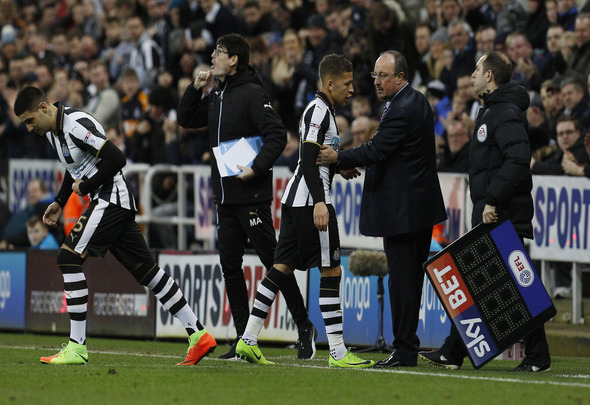 Newcastle fans are concerned on Twitter after Dwight Gayle limped off injured during their 2-0 win over Aston Villa on Monday night.

The general consensus is that Rafa Benitez should not have started the former Crystal Palace striker as he didn’t seem 100% fit.

Gayle was replaced by Aleksandar Mitrovic in the 33rd minute, and limped off holding his hamstring.

The Championship top goalscore seeminglyr suffered a recurrence to a hamstring injury which saw him miss six games for the Magpies, including their shock FA Cup exit to Oxford United.

He returned to the squad for the 2-2 draw with Norwich last week and came off the bench to take part in the closing stages of the game.

Here is a selection of tweets from Newcastle supporters about Gayle’s latest injury:

It's easy in hindsight but couldn't see the rush to get Gayle back for two winnable home games after a month out. #nufc

Gutted about Gayle, but something wasn't right. #NUFC

That was always gunna happen with Gayle, shouldn't of started him

Real shame that Dwight Gayle is injured. Heard from my mate that works in the club that he was due for an England call up. #nufc #safc #boro

It is unclear how long Gayle will be out of action for, but Benitez and the Newcastle team really need him back within a week.

After their next game on Saturday against struggling Bristol City, Newcastle face a season-defining double header with trips to both Brighton and Huddersfield – the two sides in second and third place respectively.

In other Newcastle news, Ayoze Perez delivers his verdict on the club’s 2-0 victory over Aston Villa.