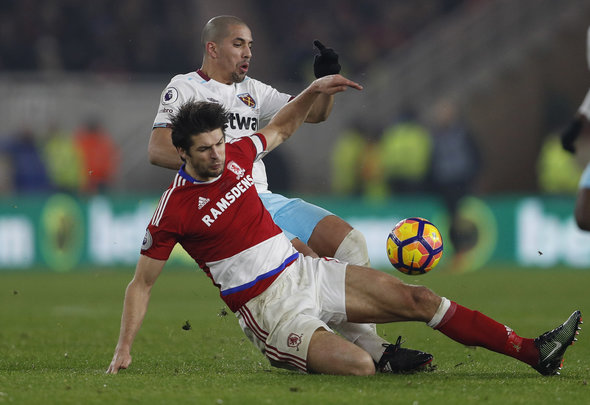 Rafa Benitez is yet to make any additions to his Newcastle defence this summer but is expected to spent big on improving his squad.

It’s widely known that newly promoted teams need a proven goal scorer as they go up, but the Magpies really need to make sure that they aren’t leaking goals at the other end of the pitch.

One man that could really improve the rearguard is Middlesbrough’s George Friend as the Mirror have reported that he is wanted by Burnley this summer – and the Magpies must join the race for him.

Middlesbrough were relegated from the Premier League last month but did so with a very impressive defensive record, which has also led Ben Gibson being linked with a move to Tyneside.

Experience will be key for the Magpies, because without players with top-flight know-how in their squad they are as good as ruined when they face up against teams like Chelsea, Tottenham or Manchester City.

Friend, 29, would definitely be an upgrade on Paul Dummett in the left-back slot, who has been criticised for his displays for most of the Championship-winning campaign.

The Boro player is also familiar with the north-east of England after spending five years on Teeside, which is definitely a plus point.

He made 27 appearances across all competitions for Boro this season, supplying two assists as the Teesiders conceded 53 Premier League goals – less than any team in the bottom half.

The ex-Wolves man is a very solid full-back and doesn’t offer a whole lot going forward, but that could be exactly what Benitez needs in his side.

In other Newcastle news, fans are urging the club to sign this 28-goal striker after a recent revelation.