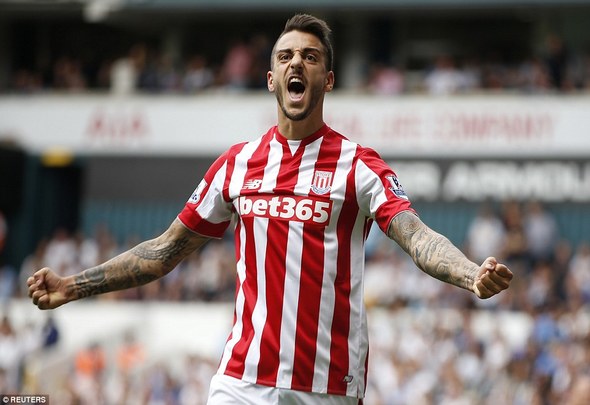 Stoke have emphatically rejected Newcastle’s bid for striker Joselu, according to a report.

The Daily Mail have claimed on their live transfer blog (Friday, 2.39pm) that the Midlands club found the Magpies’ opening offer to be “derisory”, but are prepared to listen to further bids.

The Mail report follows a claim from the Chronicle stating that they were in talks with both Stoke and West Ham for Spanish duo Joselu and Adrian.

It was detailed that the north east giants had made a “solid bid” for the striker, but that the clubs were yet to agree on a fee.

However, the Mail report seems to slightly go against the Chronicle report with Newcastle’s valuation believed to be well below Stoke’s valuation.

Joselu was previously on the books of Real Madrid and even made two appearances for the Galacticos, scoring twice.

He has since enjoyed spells at the likes of Hoffenheim and Hannover before moving to Stoke in 2015 in a £5.75million deal.

Given that Joselu is far from a contender for a first team spot in the Stoke team alongside having just two years left on his contract, Newcastle should certainly avoid breaking the bank for the Spaniard. During his two years at Stoke Joselu has returned just four goals and four assists in 27 appearances for the club. Last season saw him spend the campaign in Spain with Deoportivo La Coruna, where he returned six goals and one assist. Therefore, if Newcastle are looking to sign a proven goalscorer then they can definitely do better than Joselu and should avoid the Spaniard if his valuation is higher than the Magpies deem.

In other Newcastle transfer news, this Magpies striker has moved to an English club.