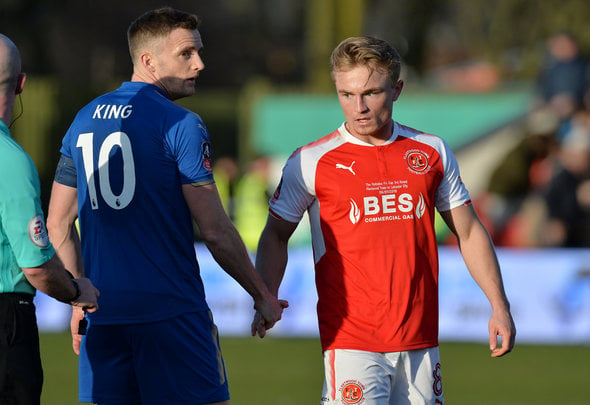 Nottingham Forest are interested in signing Leicester City midfielder Andy King, according to a reliable journalist.
Telegraph reporter John Percy has claimed on the newspaper’s live transfer blog (10:28am, Wednesday) that Actor Karanka’s side are keen on the 29-year-old.
However, it is understood that a move appears “remote” at this stage as the 11pm deadline cut-off point looms.
King has made a career as a goalscoring midfielder and has an eye-catching 6 goals from 374 games from the centre of the park.
The Wales international is the current longest serving player with the Foxes and has won the Premier League, Championship and League One with them.
He has made 15 appearances this season for Claude Puel’s side, but has slipped behind the likes of Vicente Iborra, Wilfred Ndidi and Adrien Silva in the pecking order.
Football Insider verdict
Forest fans should want to get one over on Midlands rivals Leicester and bring their highly experienced midfielder to the City Ground for the second half of the season on loan. The Welshman has proven himself to be a capable player in the top flight and would look very good if he dropped back down to the Championship. King would bolster the options in the middle of the park and he is a very dependable midfielder. He also showed that he can be a serious goal threat earlier in his career and should be able to chip for the Reds.
In other Nottingham Forest transfer news, they are lining up a move for a Bundesliga winger.
We’ve launched a << BREAKING NEWS FEED>> exclusively for your club. ‘Like Us’ on Facebook by clicking here if you want 24/7 updates on all Nottingham Forest breaking news.