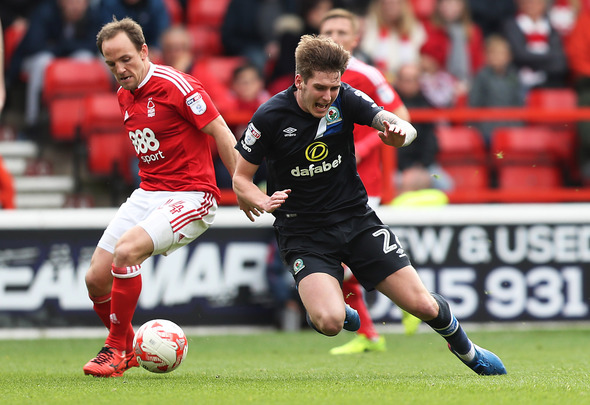 Nottingham Forest are in pole position to land Blackburn attacker Connor Mahoney, according to a report.

News outlet HITC claims that the 20-year-old is expected to leave Ewood Park in a matter of weeks when his contract expires.

However it is understood that Rovers will be entitled to compensation if he was to join another club as he is under the age of 24, meaning that Forest would not be able to snap him up on a free transfer.

Mahoney was part of the Blackburn side that suffered relegation from the Championship this season, thanks to Nottingham Forest’s win against Ipswich on the final day.

Tony Mowbray’s side were sent down to League One on goal difference, but that hasn’t stopped a number of second-tier sides holding interest in Mahoney, according to HITC.

He made 19 appearances for Blackburn across all competitions this season and supplied three assists.

The attacking winger played a big role in Rovers’ development side in the Premier League 2 league, scoring four goals in 11 matches.

Mahoney, who can play on both the left and right wing, earned his senior debut against Forest in April 2016 in a 1-1 draw which saw Dexter Blackstock get on the scoresheet for the Reds.

Mark Warburton has a lot of work to do this summer in trying to improve his current squad. Mahoney looked good in his handful of senior appearances this season and may prove to be a handy signing. Warburton’s specialty is youth, and the ex-Rangers boss can be trusted to pluck out some high quality English youngsters. However Forest need to address issues in their first-team and look to make drastic improvements to their defence. If Mahoney’s transfer fee ends up going to tribunal it could crank up the amount of money that the Reds might have to pay for him, so they could explore the option of making a bid before his contract expires.

In other Nottingham Forest news, the club will reportedly seal the signing of this goalkeeper from Belgium giants Anderlecht this week.