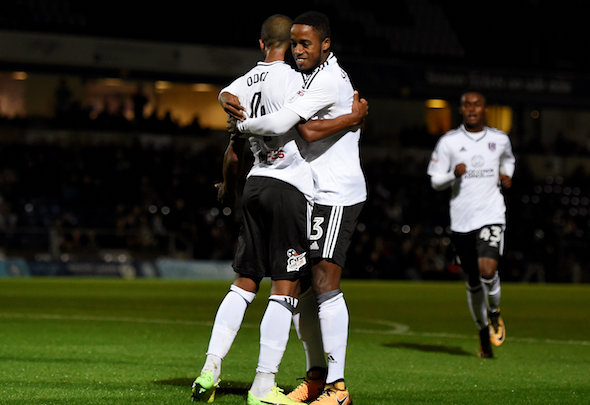 COMMENT
Tottenham are in pole position to sign Ryan Sessegnon from Fulham, according to the Daily Mail.
They claim that Tottenham lead the way, ahead of Man United and Arsenal, for the goal-scoring 17-year-old sensation, who’s currently plying his trade in the Championship.
There is one condition that Fulham are insisting on though. They want Sessegnon to be loaned back to them for the rest of the season.
It’s a double deal that Mauricio Pochettino should snap up immediately.
Sessegnon is only 17 and has scored seven goals in 26 appearances in the Championship – acknowledged as one of the toughest leagues in the world.
He’s putting in performances that are way above his years and he’s also the perfect player for Tottenham.
Spurs thrive on speed and potent attacking from the flanks and Sessegnon has got the talent to go on and rival Kyle Walker and Danny Rose at Tottenham.
Loaning him back to Fulham is fine – he’ll carry on growing and learning, and he’ll be ready for first-team action at Tottenham next season.
By snapping him up now, Poch reduces the risk of other big teams coming to their senses and driving an aggressive bidding war that Daniel Levy simply hasn’t got the stomach… or the wallet for.
It sounds like Fulham are resigned to losing him and are happy to sell him in January if Tottenham agree to the double deal.
Any Tottenham fan would be delighted with the move and it could be a case of what might have been if Poch passes the opportunity up.
In other Tottenham transfer news, Spurs have been handed a huge boost ahead of their PL clash with Man United.
We’ve launched a << BREAKING NEWS FEED>> exclusively for your club. ‘Like Us’ on Facebook by clicking here if you want 24/7 updates on all Tottenham breaking news.