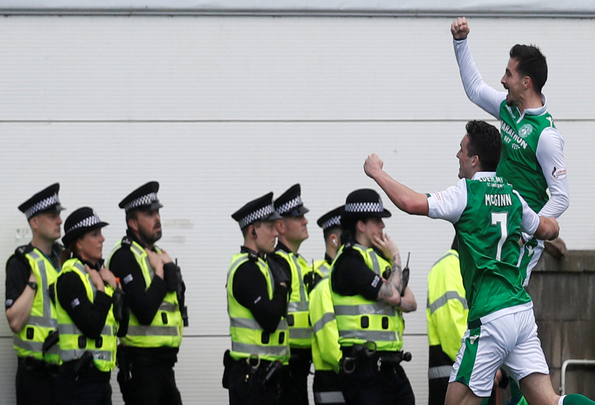 Maclaren, who is currently away with Australia at the World Cup spent the second half of last season on loan at Hibernian from German side SV Darmstadt.

The Australian still has two years to run on his contract at Darmstadt and Football Insider sources understand Rangers have made enquiries about possibly taking Maclaren on loan like Hibs did last season.

Maclaren is due to return to Darmstadt this summer after the World Cup, but a well-placed source has told Football Insider that the player is not keen on a move back to Germany as he has struggled to settle there and would prefer to move on.

Championship side Birmingham City are also interested in Maclaren after hie eye-catching loan spell with Hibs and Greek side AEK Athens are also monitoring Maclaren’s situation.

The 24-year-old impressed during his loan stint at Hibs, scoring eight goals in 13 games, including a stunning hat-trick against Rangers on the final day of the Scottish Premiership season.

Rangers have been keeping tabs on Maclaren’s situation and could offer the former Brisbane Roar player a return to Scotland as Steven Gerrard is searching for striking reinforcements after losing Kenny Miller this summer and seeing Jason Cummings return to Nottingham Forest following his loan spell.

Maclaren could only have impressed Rangers during his time in Scotland after scoring four goals in two games against the Ibrox outfit.

In other Rangers news, Steven Gerrard has revealed that the Gers won’t be signing this veteran midfielder