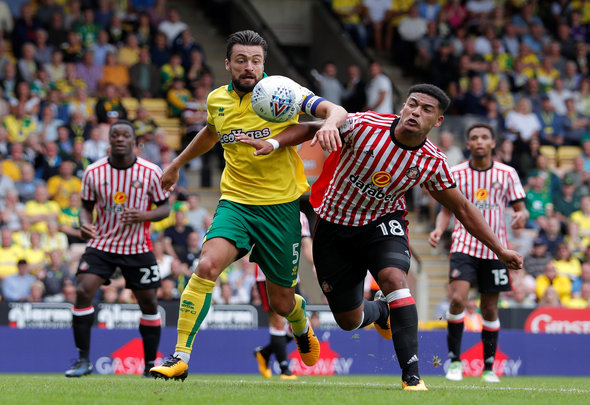 Rangers fans are absolutely delighted with the news that Norwich’s centre-back Russell Martin is set to join them on loan.
The Daily Record has claimed that the 32-year-old centre-back is set to leave Carrow Road and join Rangers within days.
He would become Graeme Murty’s third signing of the January transfer window, after Sean Goss and Jamie Murphy also joined on loan deals.
Martin has 29 caps for Scotland and has been at Norwich for seven years after joining in 2010 from Peterborough.
He comes with extensive Premier League and Championship experience, but his appearances have tailed off since last season.
Martin was a central part of the Norwich first team last year, with 37 league appearances, but he has only made seven Championship appearances this season, and now it seems he has been deemed surplus to requirements.
However, Norwich’s loss is Murty’s gain and Rangers fans are made up that he is set to play north of the border for the first time in his career.
Here is a selection of the best tweets from excited Rangers fans:

Reports saying Rangers have made a move for Russel Martin and Jason Cummings. Would be two excellent signings!🇬🇧 #RangersFC

Can't wait to see Russell Martin in a rangers top…. he's an ambassador for @CrohnsColitisUK and I've followed his career since I found this out… totsl respect for this man being able to play with his disability! An illness which has nearly killed me numerous time……

Rangers could complete triple swoop for Russell Martin, Docherty and Cummings according to the papers and rumours. I certainly hope so 👀

Martin, Cummings & Docherty would represent fantastic business IF we can do it? 🔴⚪️🔵

https://twitter.com/NewJohnKnox/status/952509919474995200
In other Rangers news, the Gers have been joined in the hunt by a trio of clubs from south of the border for this midfield powerhouse.
We’ve launched a << BREAKING NEWS FEED>> exclusively for your club. ‘Like Us’ on Facebook by clicking here if you want 24/7 updates on all Rangers breaking news.