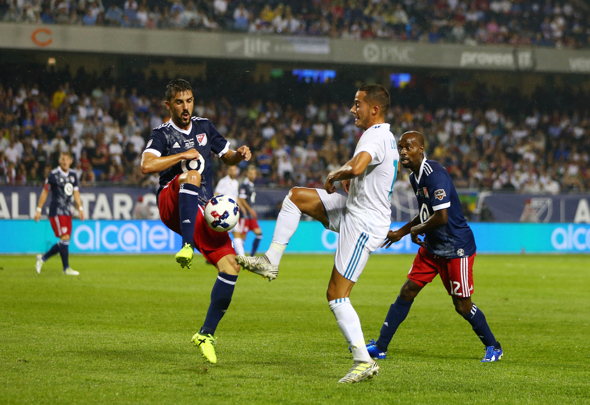 Real Madrid winger Lucas Vazquez is on the verge of asking his club for a move, according to a report.

Spanish outlet Don Balon claims the player is unsettled and will ask to leave if he is not selected for the UEFA Super Cup match between Real Madrid and Manchester United on Tuesday.

The match is between the winners of last season’s two major European competitions – Man United won the Europa League, while Real Madrid were Champions League winners.

Vazquez is reportedly worried that the rumoured arrival of Kylian Mbappe will kill any chances of first-team game-time for him next season.

He sees the match tonight as a statement of intent from the manager – if he isn’t in the starting XI without Mbappe, he believes his time at Real Madrid has come to an end.

If he does ask for a move, the Premier League looks the most likely destination.

Newcastle are interested but won’t have it their own way – Arsenal and Liverpool have also been tracking the 26-year-old attacker who recently broke into the Spain squad winning his first three caps last year.

Vazquez joined Real Madrid from Espanyol in 2015 and has made 83 appearances for the Spanish giants, scoring eight goals and adding an impressive 24 assists.

Newcastle are in desperate need of attacking reinforcements and there’s no doubt that Vazquez would do an amazing job for them. However, other clubs are in the mix and Newcastle will find it hard to get a deal like this over the line if any big clubs are interested – the money men at St James’ Park are almost making it impossible for Benitez to sign any player whose market value is high. Vazquez is a great name to be linked with though, and Newcastle fans will be checking the team news from the Super Cup tonight with interest.

In other Newcastle transfer news, the Magpies are set to battle with Euro giants to land 23-year-old.