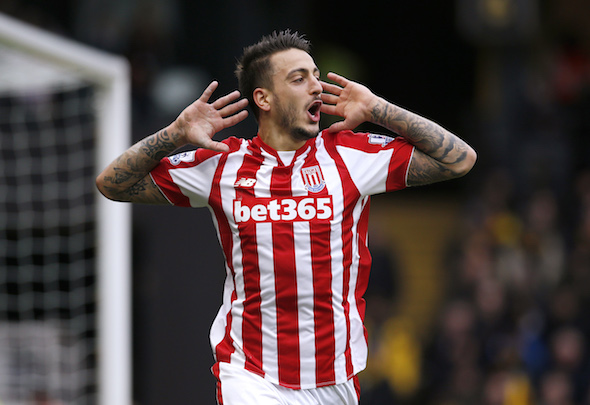 Newcastle United have agreed a fee with fellow Premier League side Stoke City to sign striker Joselu this summer, according to a report.

The Telegraph claims that the Magpies will pay £5million for the 27-year-old and the deal could be finalised within the next 24 hours.

This comes after the Chronicle chief writer Lee Ryder recently revealed on his official Twitter account that Newcastle were hopeful of landing the striker before the end of the transfer window.

The newspaper reports that Newcastle boss Rafa Benitez has been interested in signing the Spaniard for a long time.

The report claims that Joselu is likely to make his debut for the Tyneside club this weekend as they face fellow newly-promoted Premier League side Huddersfield Town.

The striker spent last season on loan to La Liga side Deportivo La Coruña and he managed to notch up six goals in all competitions, including strikes against Spanish giants Barcelona and Real Madrid.

Since completing a permanent deal to Stoke two years ago, the Spaniard has struggled to make the desired impact, scoring four goals and providing four assists in 27 appearances for the club.

This appears to be the perfect situation for all parties involved. The Telegraph reported that Joselu had fallen out with Stoke manager Mark Hughes so there was little chance of him returning to the first-team set-up especially after being left out of the matchday squad against Everton on the opening day of the season. Benitez will be delighted to add yet another member to the squad but it is a signing that might not get Newcastle supporters too excited as Joselu has failed to prove that he can deliver the necessary goals in the Premier League during his two year-spell in the country. The Toon Army will be hopeful that the striker can hit the ground running in next week’s match.

In other Newcastle news, Toon legend Alan Shearer has blasted Shelvey for his actions against Spurs.