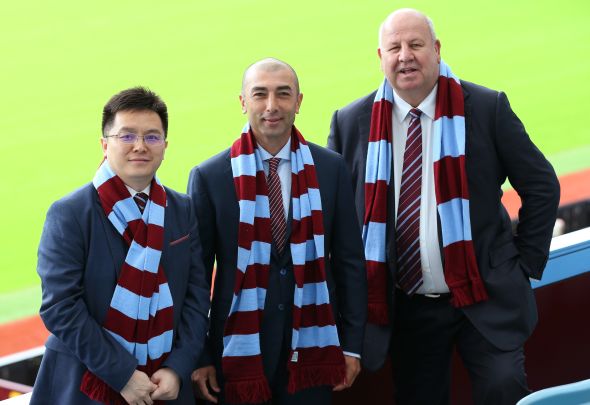 Aston Villa owner Tony Xia has posted a cryptic message on his Twitter account, claiming that apologising does not mean you are always wrong.

His new side have started the new season in dismal form, winning just one game in 11 league and cup encounters against rock-bottom outfit Rotherham.

Speaking on his personal Twitter account just hours before Villa take on Preston, Xia said that “apologising does not mean you are always wrong” and “a true friend is someone who accepts your past.”

Apologizing doesn't always mean u are wrong&others are right. Its just means u value ur relationship more than ur ego.

A true friend is someone who accepts your past,supports your present & encourages your future. So are fans2 the club. #UTV

It remains unclear who Xia was talking about, or what provoked the intriguing tweets as pressure continues to mount on the shoulders of former Chelsea boss Roberto Di Matteo.

Former Schalke manager Di Matteo has failed to turn around the club’s fortunes so far after last season’s relegation, despite £60million being splashed out on new talent this summer which has seen the likes of Ross McCormack, Jonathan Kodjia and James Chester join the club.

The Italian manager has failed to help his side hold onto a lead this season, with the Midlands giants dropping nine points to goals coming after the 85th minute against the likes of Nottingham Forest, Brentford and most recently Barnsley.

Without the concession of these goals, Villa would have won five games this season and be sitting in a much more healthy fourth place.

However, their poor form continues and Di Matteo’s side sit in 17th place in the Championship table with seven draws from 10 domestic encounters.

In other Aston Villa news, Ian Holloway has made this prediction ahead of Saturday’s clash.