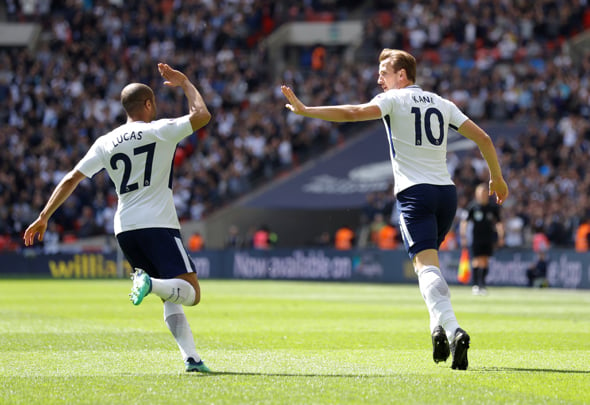 Tottenham secured third place in the Premier League on Sunday, but they did it the hard way after a thrilling and crazy final game at Wembley.

And Spurs fans were blown away by the display of rarely-seen attacker Lucas Moura.

Moura has only made six Premier League appearances since his £26million move from PSG in January, and this was only his second league start.

Manager Mauricio Pochettino had said that Moura had to learn the Tottenham way and hinted that he’d be seen more next season, but gave him 74 minutes against Leicester.

Leicester took the lead in just the fourth minute through Jamie Vardy before Harry Kane, chasing the Golden Boot, scored in the seventh minute to equalise through a Moura assist.

Riyad Mahrez restored Leicester’s lead before a glut of goals in the second half eventually saw Tottenham secure third place with Kane’s second in the 76th minute.

It was a satisfactory and highly enjoyable end to the season for Tottenham, and fans are thrilled at the prospect of seeing Moura unleashed next season.

Here are the best reactions to his game on Sunday:

Lucas Moura is different class. With a pre season under his belt he will be quality for us next season #COYS

Great to see the potential of Moura today, everytime he got the ball the crowd at Wembley was up off their seats in anticipation of what he was going to do it.

Really excited to see the player in the first-team next campaign on the back of a full pre-season with us.#THFC #COYS pic.twitter.com/SA097C4tAt

Lucas Moura looked so so so good today, surely will rotate with Son next season? #COYS

But two stand out players in KWP and Moura, these two are going to be vital next season #coys

Lucas Moura is looking very sharp. Looking forward to seeing him in the starting lineup more next season. #TOTLEI #COYS

In other Tottenham news, Get him out, Reckless, Disgrace – Tottenham fans annihilate 26-y/o after display v Leicester