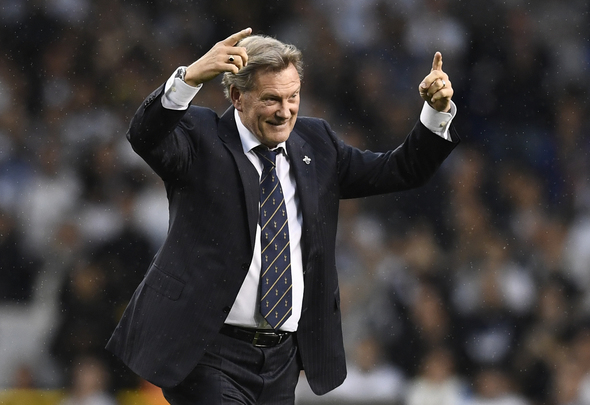 Glen Hoddle has suggested that Mauricio Pochettino could target Man City’s 6ft 2in enforcer John Stones if they lose Toby Alderweireld over the summer.

Hoddle mooted the idea in his column in the Mail Online, after England’s 1-0 win over the Netherlands on Friday.

Stones played as part of a back three and looked composed and in complete control.

The enforcer is finding it hard to get game time at Man City though, with just nine minutes of action in the last six Premier League games.

And that got Hoddle thinking that he might have to look to leave the runaway Premier League leaders in the summer.

“Going back to Stones, it seems strange to think that any player should ever consider leaving Manchester City but I think the only worry for his career is whether he goes on to play enough club football.

“Pep Guardiola also has Nicolas Otamendi, Aymeric Laporte and Vincent Kompany to pick from so we’ll have to see how it works out for John.

“Perhaps Tottenham would be interested if they are unable to keep Toby Alderweireld?”

There is masses of speculation surrounding Alderwiereld’s future at Spurs at the moment, with the latest report from HLN in Belgium suggesting that he will be sold for £44million in the summer.

If he does depart though, Tottenham fans do not want John Stones as his replacement.

They do have other suggestions though, with Harry Maguire and Matthijs de Ligt both mentioned as better alternatives.

Here are the best reactions to the Hoddle suggestion:

No I would take Matthijs de Light.

If we have to lose Toby I think Harry Maguire would be a better replacement for Spurs.

Why would Stones leave City especially as he's either on more money or they'd offer him wages that we couldn't compete with !! It's a non starter & does Hoddle no favours talking such rubbish

He’s got a mistake in him. Maybe Poch can coach that out of him though. Would be a bit of a gamble.

We wouldn’t get Stones. I still see Eric Dier being a centre back eventually, but in the meantime we would need additional cover and Maguire would be a good choice. Still think Toby may stay though

No way.Hoddle as usual talking shite

No don’t want Stones, if we are losing Toby the only replacement for me is De Ligt – Ajax