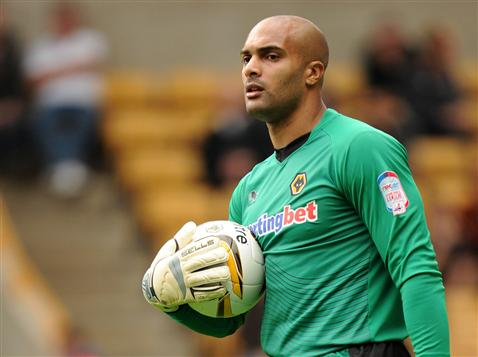 Wolves fans have reacted to Carl Ikeme’s goalkeeping clanger in the first half of their defeat to Birmingham on Twitter – and they’re not happy.

Ikeme looked to have easily caught a wayward cross from Craig Gardner, but the 30-year-old dropped the ball straight into the path of Maikel Kieftenbeld who tapped the ball into the net.

Supporters of the Black Country club were angered as the mistake came at an important time when Wolves looked to be on the front foot.

Birmingham had failed to register a shot on target before the first goal but they used it as inspiration to double their lead through former Wolves man David Davis.

Wolves got a goal back after Birmingham were reduced to ten men in the second half, but they couldn’t find an equaliser in a frantic finish and lost 2-1.

Here is a selection of tweets from Wolves fans about Ikeme’s error:

Ikeme is experienced enough to know he was stretching too much for that, he was never gonna hold it – even I knew that. Punch it ffs!!

That was abysmal Ikeme. Sorry but it was. #wwfc #wolves

Oh and Ikeme, Batth and Stearman all need dropping. Absolutely shocking, all three of them! Time to get rid! #WWFC

Only a hat trick from Carl Ikeme will make up for that bit of goal keeping.. #shocking #wolves #teflon

We should start Burgoyne in goal instead of Ikeme

With any luck Ikeme punches another tactics board and breaks his hand. How Jacket thought he was better than Hennessy…

There were boos at half-time as Paul Lambert’s side went down the tunnel two goals behind.

The defeat will see Wolves slip closer to relegation zone if results go against them over the weekend.

Wins for Wigan and Bristol City could mean Lambert’s side will be just two points clear of the bottom three.

The club were last relegated to League One in 2012/13 when they suffered back-to-back relegations, however they secured an instant return to the second tier.

In other Wolves news, Lambert makes a shocking admission about his meeting with the club’s owner.