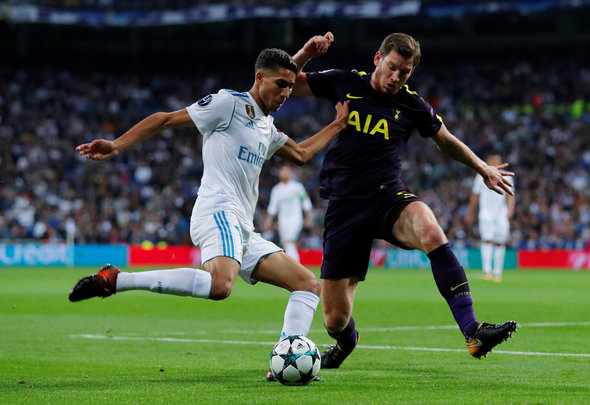 Newcastle are hoping to sign Real Madrid defender Achraf Hakimi on loan in January, according to a report.
The Sunday Express (7/01, p39) claim that Benitez is looking to his former club in the hope of snapping up the exciting youngster on a temporary deal.
However, it is said that he will face stern competition from Sporting Lisbon and Real Betis.
Despite only being 19-years-old, the right-back is a full international and has made six appearances for Morocco, and has scored one goal for his country.
He has made five La Liga appearances this season, adding another goal for Real Madrid, and has played 90 minutes in two Champions League matches against Tottenham.
The report claims that Benitez’ connections could put him in pole position to secure the deal.
Football Insider verdict:
This seems like the perfect deal for both sides. Real Madrid want the exciting talent to go out and get match experience. Newcastle are desperate to strengthen their squad ahead of what looks like being a relegation battle. Benitez’ connections with Madrid should help smooth the deal over, but realistically where better for Hakimi to learn his trade than at the business end of the Premier League? Newcastle are a big club at the wrong end of the table and Hakimi could thrive on the big stage.
In other Newcastle United transfer news, a top flight club have opened talks about signing a Magpies fans’ favourite.
We’ve launched a << BREAKING NEWS FEED>> exclusively for your club. ‘Like Us’ on Facebook by clicking here if you want 24/7 updates on all Newcastle United breaking news.