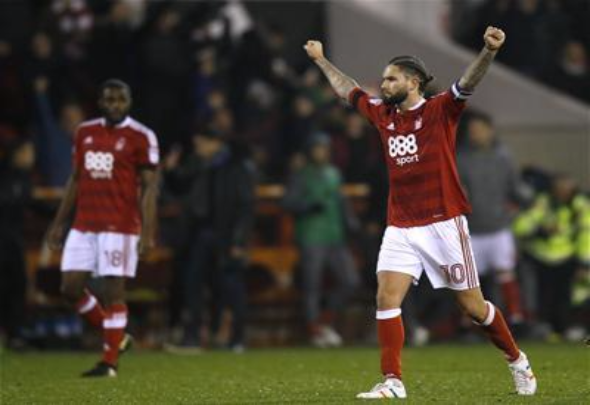 Birmingham are looking to take advantage of Henri Lansbury’s contract situation at Nottingham Forest, according to a report.

The Birmingham Mail claims that Gianfranco Zola is targeting the 26-year-old Forest star, whose deal is set to expire in the summer.

It is stated that Forest owner Fawaz al-Hasawi is putting a block on any new contract offers until he sells the club.

This has alerted Birmingham and Zola, who is reportedly being handed a £9million transfer budget by new owners Trillion Trophy Asia Limited.

Lansbury is the stand-in captain for Nottingham Forest after joining from Arsenal in 2012 and he is considered one of the club’s better players, starring in 150 encounters with a return of 33 goals and 20 assists during his time in the side.

His departure would be a huge loss for Philippe Montanier’s side, who are currently struggling in 17th place in the Championship table.

By contrast, Birmingham are occupying eighth in England’s second tier and after the shock sacking of Gary Rowett they will be gunning for a play-off place.

The Midlands side sit three points outside of the top six with a match against Forest’s fierce rivals and fellow play-off contenders Derby next.

Lansbury would be a devastating loss for Nottingham Forest in a so far disappointing season. Manager Montanier has had his arms tied given the current ownership situation and it would appear to be getting worse with just 10 days before the winter transfer window starts. The longer Kuwaiti businessman Al-Hasawi is at the club the longer it will damage Forest. Therefore, he should look to sell the famous side as quickly as possible, or the new owners could be purchasing a broken club requiring a lot more work than they first thought. The fans will probably have to accept that star Lansbury is now gone, but it must now be ensured that no more assets are allowed to leave the club on the cheap.

In other Nottingham Forest transfer news, Forest are joint favourites to land this goal machine in January.