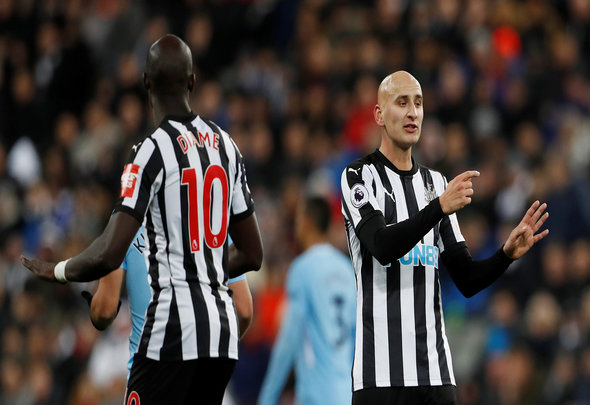 West Ham’s move for Newcastle playmaker Jonjo Shelvey is in doubt after a double blow to the London club’s ambitions, according to a report.
The Sun claim that Newcastle have hit a standoff with manager Rafa Benitez over transfers this January.
He has been told he can only sign new players if he moves players out first, but Benitez will not let anyone leave until he signs someone.
The standoff means that any transfer business is complicated and could drag on until late in the window.
That’s a blow to West Ham, who opened talks with Newcastle over the past few days over a £12m deal for the pass master, according to the Express.
The report also claims that West Ham are also interested in Arsenal midfielder Francis Coquelin, Etienne Capoue from Watford, Anderlecht’s Leander Dendoncker and Stoke’s Joe Allen.
Even more damaging to the move is the claim by the Sun that regardless of transfer action, Benitez will not sanction a move for Shelvey.
It is claimed that Benitez sees him as a key player for Newcastle and does not want him to leave – especially to a relegation rival like West Ham.
Football Insider verdict:
This will be a real blow for West Ham who must have though they were close to landing their man. However, from a Newcastle perspective it makes sense. Shelvey and Benitez might have had their issues this season over the player’s poor discipline, but why would the Newcastle manager want to strengthen one of his relegation rivals? If Newcastle ended up getting relegated partly because of Shelvey keeping West Ham up it would go down as one of the worst bits of business ever. The one thing we don’t know is how much power Benitez actually has at Newcastle.
In other West Ham transfer news, one man is set to undergo imminent surgery after picking up an injury in the Shrewsbury draw.
We’ve launched a << BREAKING NEWS FEED>> exclusively for your club. ‘Like Us’ on Facebook by clicking here if you want 24/7 updates on all West Ham breaking news.