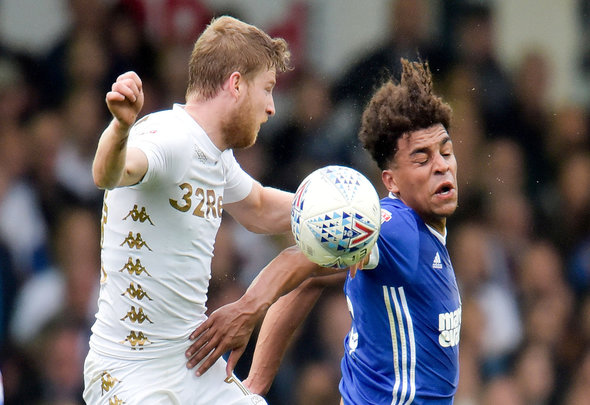 Eunan O’Kane was sent off for Leeds in an off-the-ball incident, said to be a headbutt, in the 37th minute of the Championship game with Ipswich.
Leeds had enjoyed the better of the first half up to that point but finished the first half under the cosh after the were reduced to 10 men.
It’s the latest in a string of disciplinary issues for Leeds under manager Thomas Christiansen this season, after Gateano Berardi was banned for three games for a headbutt on Bristol City’s Matty Taylor and Samu Saiz was banned for six games after a spitting incident in the FA Cup defeat against Newport.
Ironically, after the Saiz ban was announced it was O’Kane who said that the players were disappointed with the attacker and that he would learn a lesson from his ban. That was earlier this week.
Back to the game and Leeds managed to get to half-time with the score at 0-0, but they couldn’t last the full 90 minutes and lost 1-0.
Fans are completely fed up with the latest problem to hit their squad, at a time when they need all the bodies they can get.
Here is a selection of the best tweets from disgruntled Leeds fans:

Your turn to apologise to the players & fans eunan https://t.co/3pX3k81pob

Not a hope of finishing top 6 playing like this. That was even before O'Kane saw red. Awful to watch #lufc

Now o’kane is sent off we’ve got 9. May as well bring grot and lassoga on and play with 7 least it gets abandoned if we go down to 6

In a game that was not causing us many problems O'Kane and his stupidity has given us a serious one. #lufc

#LUFC Severe lack of discipline at Leeds, we're on top and we've shot ourselves in the foot, really annoyed with O'Kane TC needs to sort this ASAP… Not happy grrr #MOT

Feel sorry for TC. Can't legislate for lack of discipline from senior players. O'Kane has let his teammates down #lufc

But o'kane obviously hasn't learnt anything from the incident, ffs #lufc https://t.co/DcOozk8lr2

https://twitter.com/LordSnooty68/status/952204756361138178
https://twitter.com/joebilbey/status/952204605387100162
In other Leeds United transfer news, a club chairman has dropped a huge hint that the Whites may have contacted him about this 23-goal forward.
We’ve launched a << BREAKING NEWS FEED>> exclusively for your club. ‘Like Us’ on Facebook by clicking here if you want 24/7 updates on all Leeds United breaking news.