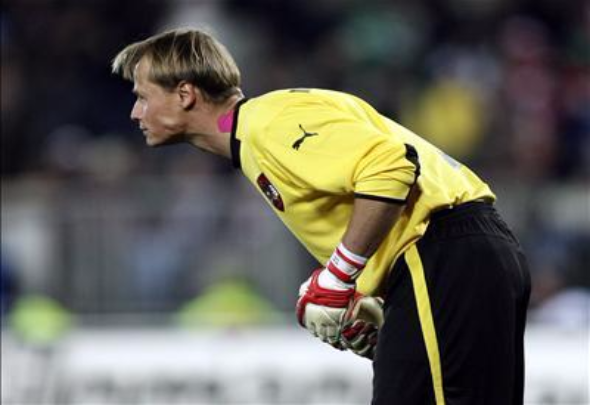 Alex Manninger has started training with Liverpool as he aims to earn a contract at the Anfield club – and Liverpool fans on Twitter haven’t took the news too well.

As reported on Football Insider, Reds boss Jurgen Klopp is considering bringing in Manninger as his third-choice keeper behind Simon Mignolet and summer signing Loris Karius.

The 39-year-old goalkeeper has 11 Champions League appearances to his name, five with Juventus and six before that at Arsenal.

However, many Liverpool fans have not been too supportive of the decision despite the goalkeeper’s experience.

Im pretty sure that 1 of there principles was to buy young and develop for the future, excuse me Manninger is 39 for gods sake #fsgout #lfc

Are we serious in trying to sign Manninger, the man is 39 what do you expect from a player of his age, to make lighting reflex saves #lfc

Why would we sign Manninger, 39 as 3rd choice GK that space should be filled by a17/18 year old who's learning off the senior pros IMO #LFC

Manninger was reportedly training with the Anfield club after Football Insider reported on Monday morning that 23-year-old keeper Danny Ward has agreed to join Huddersfield on a one-year loan.

That deal came after the Wales Euro 2016 star secured a new five-year deal contract and Ryan Fulton left to join Chesterfield on loan.

Adam Bogdan is also set to join Wigan after an unimpressive first season at the club, despite the deal taking some time to complete due to the 28-year-old’s wage demands.

In other Liverpool news, the Reds are set to battle with Tottenham for the signature of Dutch star Georginio Wijnaldum.