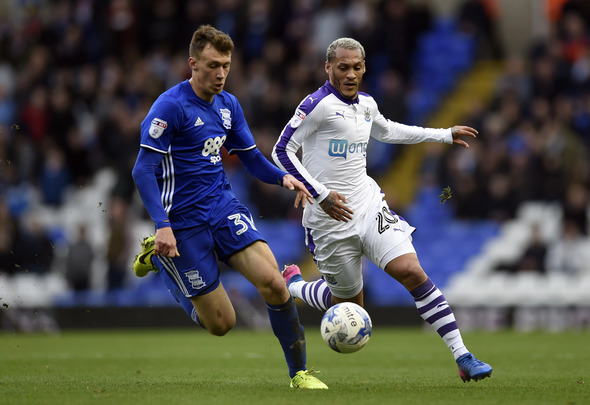 Football Insider rates the Newcastle players out of 10 for their performances in the 0-0 draw with Birmingham at St. Andrews on Saturday.

Karl Darlow 7 – The shot-stopper was rarely tested by the home side and only made his first save in the 85th minute. However when he was called upon to collect crosses and pounce upon lose balls, Darlow was there.

Vurnon Anita 5 – The 27-year-old doesn’t look comfortable at right-back and Birmingham knew this. He lacked the anticipation required to play in the position and was lucky that Blues didn’t bring their shooting boots with them on Saturday.

Grant Hanley 6 – Didn’t look too fazed as Birmingham piled on the pressure in the opening half and made some vital interceptions. However his long balls forward were very questionable at times.

Jamaal Lascelles 6 – The Magpies captain had a few nervy moments but on the whole remained quite solid in the middle of the Magpies back four.

Paul Dummett 7 – Attacked well down the left flank and also defended well when he had to. Dummett has been on the receiving end of a lot of stick from the Toon Army but he was one of the best players on Saturday.

Matt Ritchie 5 – The ex-Bournemouth man’s crossing was very inconsistent against the Blues and set-pieces in general were extremely poor. He needs to be more clinical in front of goal but he had a goal harshly ruled out for offside.

Mohamed Diame 5 – Had an embarrassing moment when he swung his leg at thin air when he had a chance to trouble the Birmingham goalkeeper. Diame had problems controlling the ball throughout the game and has to step up his game if he is to keep Jonjo Shelvey out of the side.

Jack Colback 6 – Looked composed on the ball when he had it and also got forward well. However it was a very anonymous performance from the former Sunderland man.

Yoan Gouffran 5 – The 30-year-old barely had an impact for Newcastle in what was a stinking performance. He looks as though he needs a rest.

Ayoze Perez 7 – Got himself among the chances and was a constant thorn in the side of Gianfranco Zola’s side in the first half. The attacking midfielder looked like a new signing on Saturday.

Daryl Murphy 7 – Led the line well but chances were limited. The 34-year-old was up to the physical fight against the Birmingham defenders and on the whole he got the better of them every time. Tomasz Kuszczak played well in goal against the Toon striker.

In other Newcastle news, fans have reacted to Huddersfield’s surprise defeat to Bristol City.