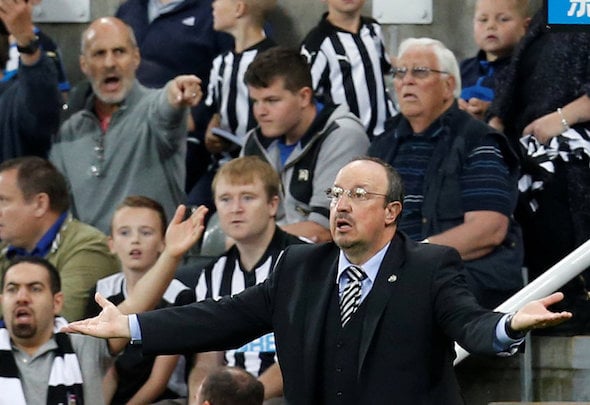 Newcastle United manager Rafael Benitez has got to ensure he makes the right decisions with his starting line up if he hopes to get anything out of Saturday’s clash with Arsenal.

The Magpies travel to the Emirates Stadium on the back of a dreadful run of form, with an eight match winless streak garnering just a solitary point from a possible 24.

Their form is among the worst in the league and the Spanish manager knows he has got to turn it around sooner rather than later.

Saturday sees him go up against Arsenal, a side he has never won away at in the Premier League as manager, while the Gunners have tasted victory in each of the last nine games against Newcastle.

Coming off the back of a 1-0 home defeat to Everton, Benitez should replace Karl Darlow, Jonjo Shelvey, Mo Diame, and Javi Manquillo with Rob Elliot, Chancel Mbemba, Isaac Hayden and Paul Dummett in an unconventional 4-1-4-1 formation against the Gunners. Between the sticks, Elliot should replace Darlow after his clanger against Everton, while Benitez will be overjoyed he has a natural left back available in Welsh international Dummett, following his injury layoff.

Mbemba, a natural centre back, should be utilised in a deep lying defensive midfielder’s role, allowing him to slot into the back line while adding another body to help crowd the midfield and disrupt Arsenal’s attacking threat.

Midfield enforcer Hayden, a graduate of the Arsenal youth ranks, is the obvious candidate to replace the suspended Shelvey in midfield, and his industrial nature will free up Mikel Merino alongside him.

Wingers Matt Ritchie and Christian Atsu will have to sit deep to help protect the back line, but should be able to break on the counter alongside the pacy Dwight Gayle, who can expected to cut a lonely figure up top against the Gunners.

With a reliance on midfield tenacity and counter attacking football, this is an XI which is Benitez’s best chance of springing a surprise in north London.